Congratulations to December’s Hardscape Hero, Mike Halliday of Bluehill Landscapes. Mike is a previous Hardscape Hero, having won in January 2015. Mike brings 15 years of experience to hardscape projects in and around Charlottesville, VA. He loves wakeboarding and says “I take my kids and my friends any time I can and try to spend as much time as possible on the water.”

When it comes to work, Mike says that Bluehill Landscaping’s “real strength is being able to take a space and use what we have to help the homeowner. We’re great at building beautiful patios in less than ideal conditions.”

Halliday’s favorite aspect of hardscaping is “being able to ‘wow’ homeowners. There’s a lot of gratification in the level of trust that homeowners put in you. It’s awesome when they start to see the transformation happen and get excited about it. That’s when the project gets really fun.” 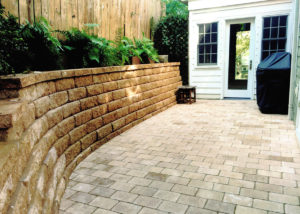 Trust is a core company value at Bluehill Landscaping and Mike emphasizes that his relationships with his clients are the most important part of any job. “Our jobs can take up to a month to complete, so we really work to establish relationships with the homeowner. We always spend a couple of extra hours on the job making sure everything is just right. For example, I recently delivered firewood to the client’s home so they could use their new fire pit. It’s all about the relationship.”

The winning job was a challenge for the crew at Bluehill Landscapes for a few reasons. Mike explained that because the client’s house was on a one-way street in downtown Charlottesville, VA, they weren’t able to use their dump truck or landscape trailer. To overcome this, the team had to wheelbarrow all of their materials into the site, squeezing through a 3 foot wide opening in a fence.

It’s a perfect example of Halliday’s crew doing what they do best. “The soil at the jobsite was very rocky, so after demoing the old patio, we had to spend additional time breaking up those rocks before laying the base. This, on top of the tight quarters made it really tough.”

The client was referred to Bluehill from another landscaper. “They already knew what they wanted, so when they came to us, they asked us to build a patio and repair the wall and steps. They left the design almost completely up to me, so I worked to maximize the space,” Mike says.

The winning job was completed using Cottagestone Textured 6×9 pavers, Diamond 10DS retaining wall blocks, 3” XL caps and 6” Highland wall block. The team at Bluehill was able to negotiate the tight space by custom cutting many pieces. As well, the project was completed on the heels of a larger home renovation. “The clients were amazed by the new functionality of the space. We’ve started talking about a fire pit since,” says Halliday.

He also says that the biggest thing a homeowner new to hardscaping can do, is not get discouraged. “There’s a misconception that hardscapes are super expensive. In reality, they’re pretty attainable and homeowners should definitely take the time to explore all of their options, materials and contractors,” says Halliday.

The crew at Bluehill Landscapes has a knack for doing the impossible and it’s clear that Mike’s philosophy towards hardscapes is geared to make them a reality for nearly every homeowner.

Want to be our next Hardscape Hero? Submit your project here.