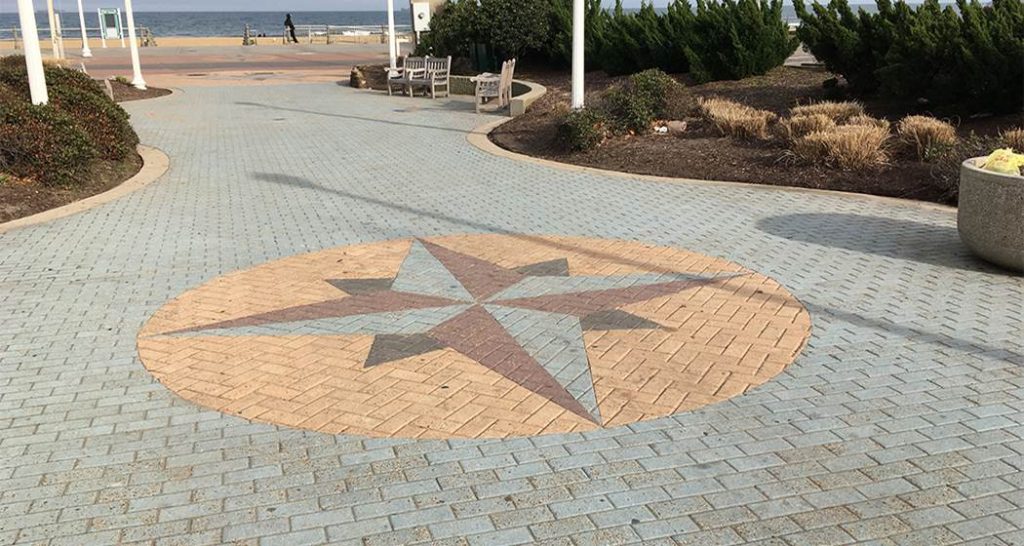 “We wanted to do something that really stood out,” says Hampton. “We’d had the idea for a while and finally got the opportunity to try it on a client’s patio. We submitted that job to some awards, and it sort of went viral online. Soon, contractors were reaching out to us from all over the country for custom inlays.”

Seeing an opportunity to benefit the community and demo a new product, Techniseal Regional Sales Manager Aaron Phifer and the team at Eagle Bay proposed the beachfront project to the Resort Area Commission. “Nothing was wrong with the pavers,” says Phifer Regional Sales Manager for Techniseal. “This was an aesthetic fix. The compass is 20 years old. It was the perfect opportunity to showcase what NuLOOK is capable of.” 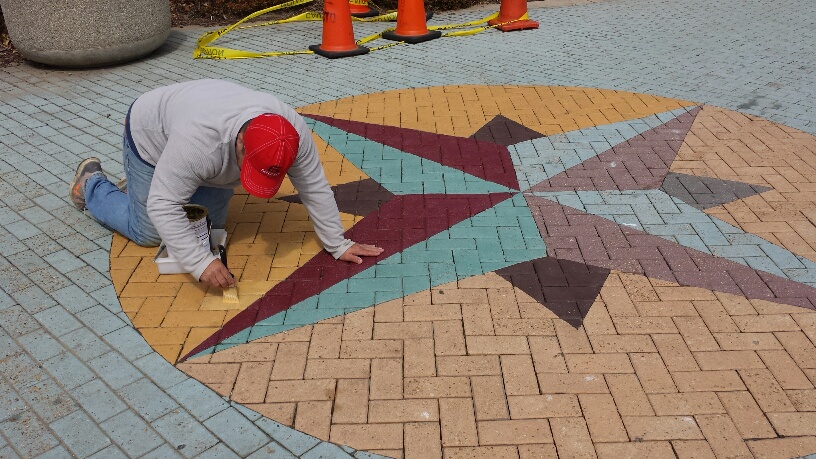 At the beginning of the project, Phifer met with the Resort Area Commission to present the suggested demo and installation for the city seal. The vote to allow the demo passed unanimously. “They were so excited,” he says.

After the city issued the necessary permits, Eagle Bay and Techniseal jumped into action, shipping Hampton the pavers to complete the custom seal.

“The seal looks great. The detail work is beautiful, and it’s exciting to see the kind of quality that pavers have to offer as we think about future projects,” says Emily Archer, urban planner for Virginia Beach.

Hampton’s team works out of their shop in Omaha, Nebraska. Usually, contractors will ship the pavers necessary to complete a design, then Hampton and his team will lay a stencil, cut the design into the pavers and apply Techniseal’s NuLOOK in whatever custom colors are needed. 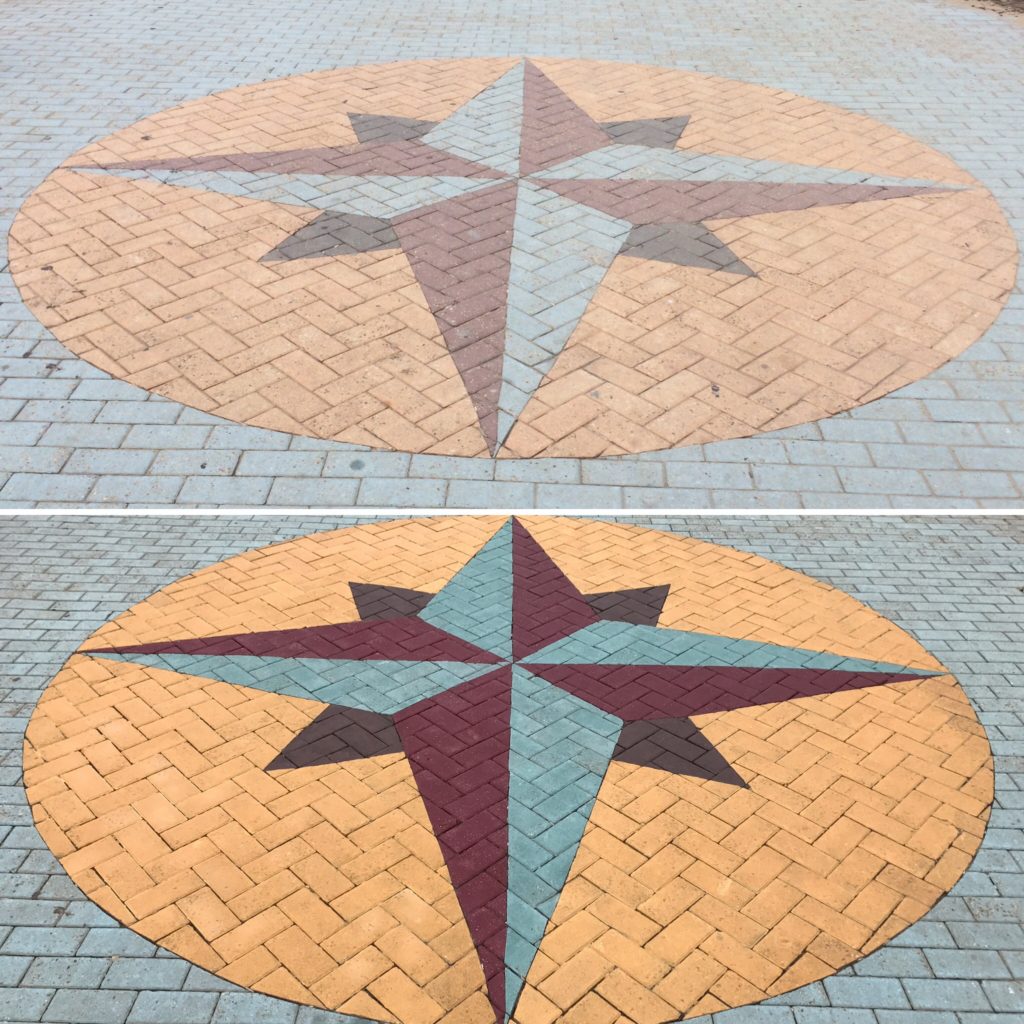 “Techniseal is awesome. When we start a project, we send them the pantones we need for the application; they make it and send it over to use on the pavers. We can get any color we want,” says Hampton. 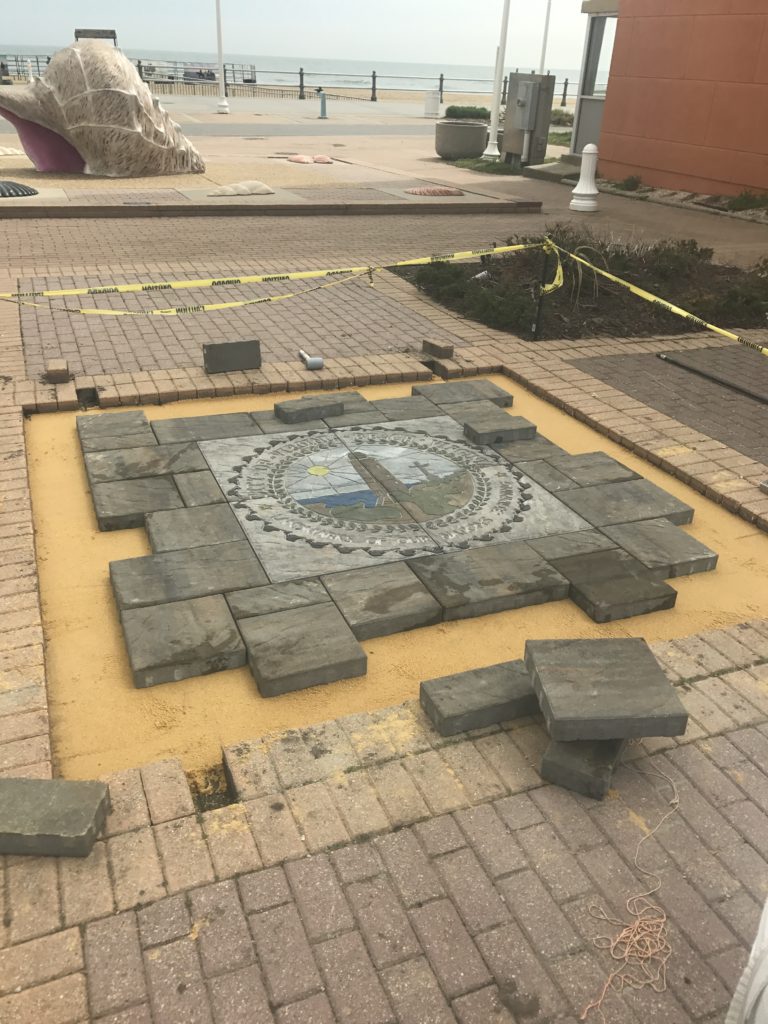 The seal for Virginia Beach is an intricate design, and Hampton explains, “It was definitely the hardest thing I’ve worked on. It’s very detailed, and it gave me the opportunity to try new techniques and really push the boundaries. On a normal job, I can cut the stencil in a day. The Virginia Beach seal took three.” 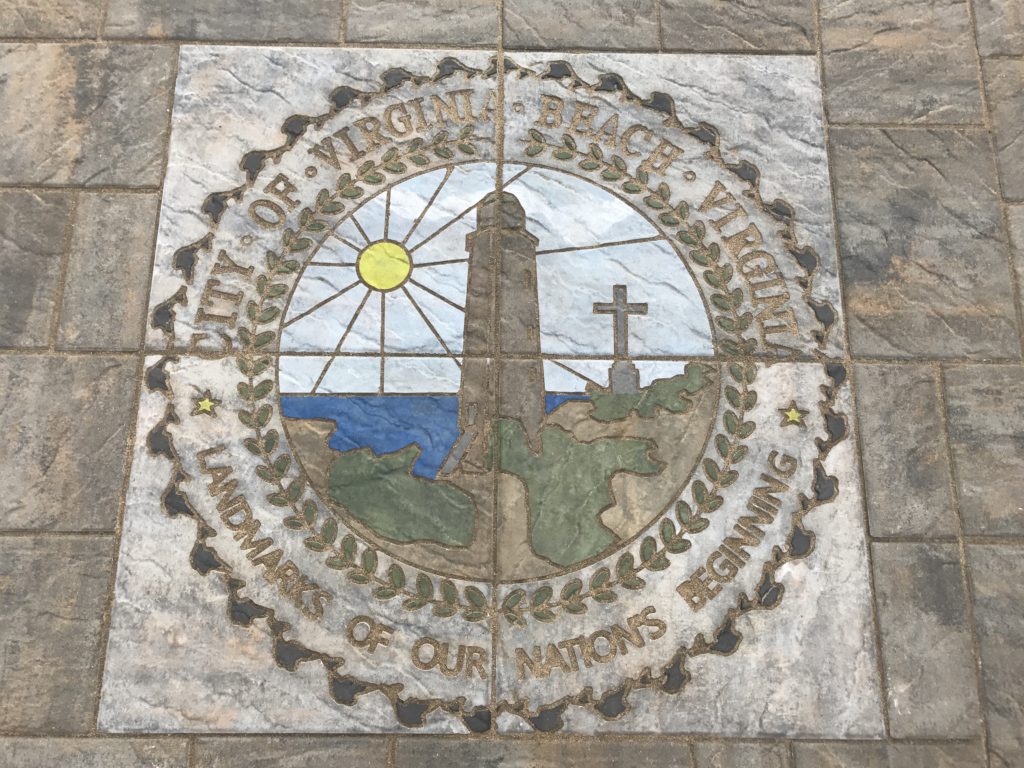 Hampton even traveled to Virginia Beach to install the custom-made seal and conduct a live product demo on the compass at the 20th Street connector. As well, Sean Allison – Techniseal’s architectural and commercial rep was also brought in to help with the install and to answer any questions the city might have. Sean works on large scale commercial projects all over the United States.

“The demo couldn’t have worked out better,” Phifer explains. “Members of the Resort Area Commission showed up, along with several contractors from the region. Everyone was intrigued by the capabilities of NuLOOK and by Hampton’s process.” 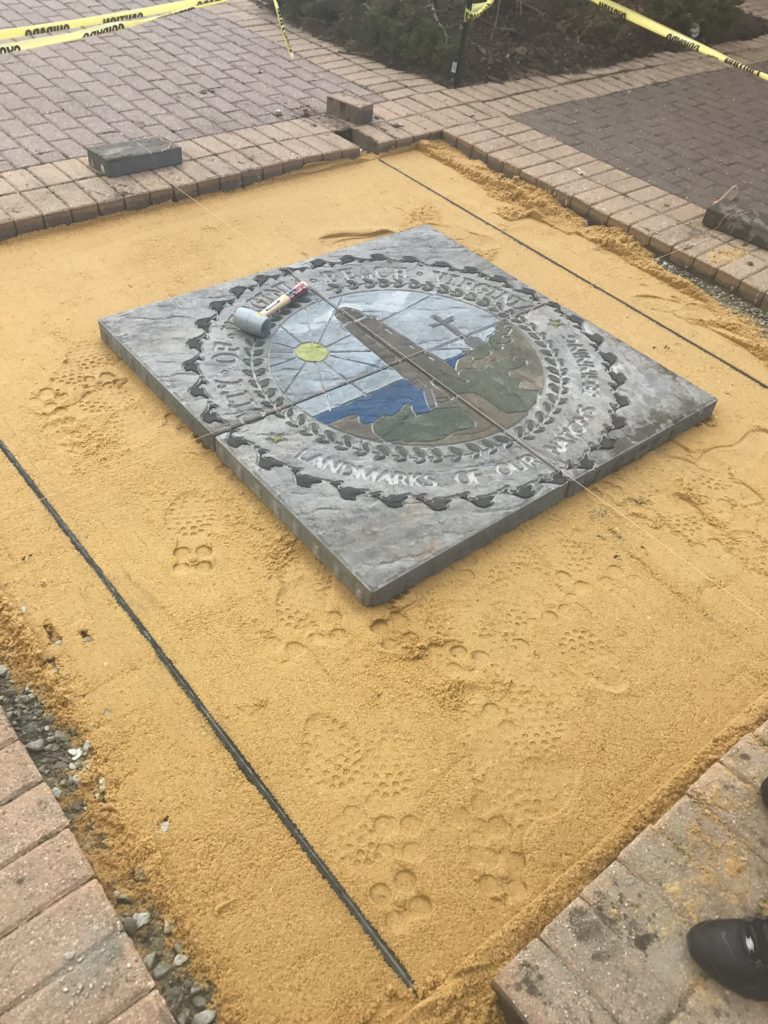 Hampton spent a few days laying the custom-made city seal and stripping and refinishing the compasses.

“Doing the demo was fun. There were a lot of people there, and everyone had questions,” he says. “I loved being able to show everyone how we do things and speak with people about the capabilities of NuLOOK and Paver Designs LLC. A lot of people don’t realize how much pavers can do. NuLOOK and the ability to make custom colors and designs just adds another layer to that.” 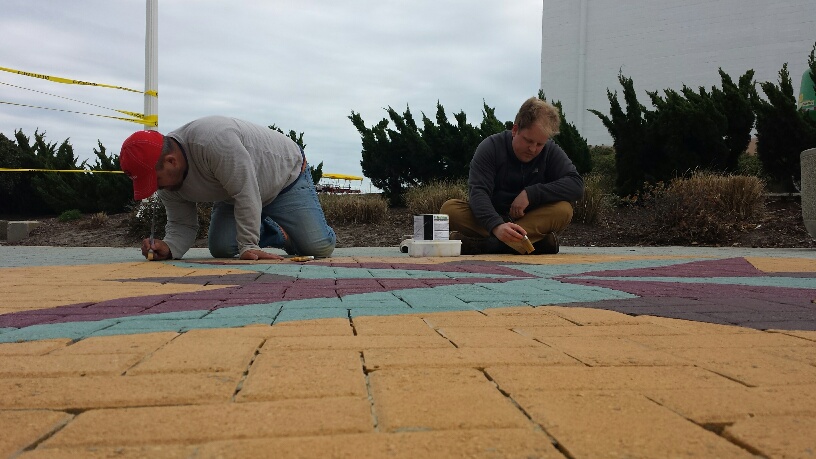 Aaron Phifer (right) from Techniseal and Greg Kirkman (not pictured) from Eagle Bay were at the job site during the demo to answer questions from contractors and the City Council.

“We’re happy that we were able to help the city of Virginia Beach revitalize an area that sees some of the highest traffic in the region. We loved working with Justin and the folks at Techniseal. The product demo was a great success, and we plan to offer more events like it in the future.” – Matt Kwarta, Eagle Bay Marketing Director