“Unless you try to do something beyond what you have already mastered, you will never grow.”- Ralph Waldo Emerson

This month’s HARDSCAPE HERO winner, Clinton Ferris of Ferris Landscaping, knows what it is to take a leap of faith, try something new, and succeed. His winning project involved taking a steep and unusable yard and turning it into a beautiful outdoor living space while creatively experimenting with Eagle Bay pavers.

“The backyard was made up of a small walkway and a steep drop off, making the space almost unusable. The homeowners had some landscaping completed, and wanted to make more use of the space,” says Ferris. 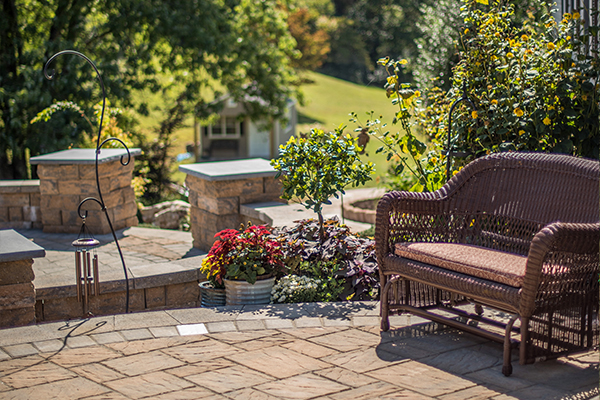 The team at Ferris Landscaping faced a difficult challenge, working around the steep grade while also integrating the patio into the existing landscape. This included navigating recently installed trees and other features.

“When we met, the homeowners were at a loss as to what they could actually do in the space. They showed me a few reference pictures and let me design from there,” Ferris explains.

To conquer the grade, the team at Ferris Landscaping created a three-tiered patio that linked into a walkway, allowing access to a basement door and a gradual step-down from the house, while also creating a large social area on the second tier of the patio. 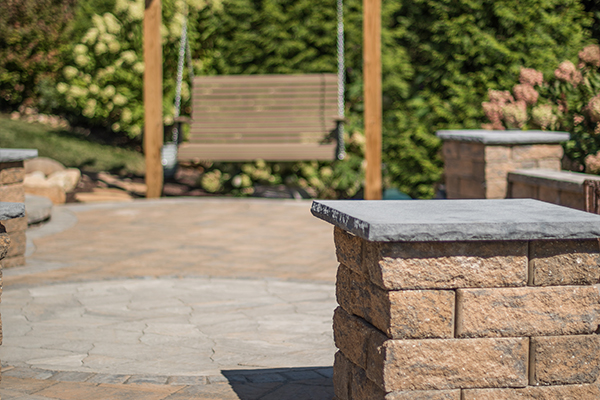 “While we were installing the second level, we thought it would be fun to use EssexStone to create a pattern similar to the CircleStone Kit. It took a lot of custom cutting and patience, but we wanted to try something new,” says Ferris. Combined with the inlay, the custom EssexStone section adds visual interest to the outdoor living space.

That wasn’t the only detail of the project that made it stand out to the judges, however. The space included a three-tiered patio, integrated lighting, custom inlays, and several natural stone elements. To top it all off, Ferris and his team installed a pond-less waterfall surrounded by natural stone descending parallel to the patio.

“The homeowners didn’t want to lose any of the trees, so we planned the whole installation around that. We also added more garden beds and large boulders, and the homeowners actually did a lot of their own landscaping. It was great to work alongside them and build the project together,” says Ferris.

HARDSCAPE HERO winners are often faced with challenges that require them to go above and beyond. It’s the execution, however, that distinguishes projects in the eyes of the judges. Clinton Ferris and his team not only handled a difficult installation area but also took the risk of trying something new.